Residents of the northern highlands of Nicaragua were typically overlooked by modern infrastructure development. The Association of Rural Development Workers has changed this, securing access to electricity and clean drinking water for local people for the first time. Today the association is also generating enough profits from hydro power to fund US$300,000-worth of development in the region.

The Association of Rural Development Workers was founded when American engineer Benjamin Linder moved to Nicaragua in 1985 to help communities construct the first hydro project in the San Jose de Bocay region. Benjamin’s murder by Contra rebels sparked an uprising both locally and internationally, leading not only to the setting up of the association but also a renewed focus on development in the region. 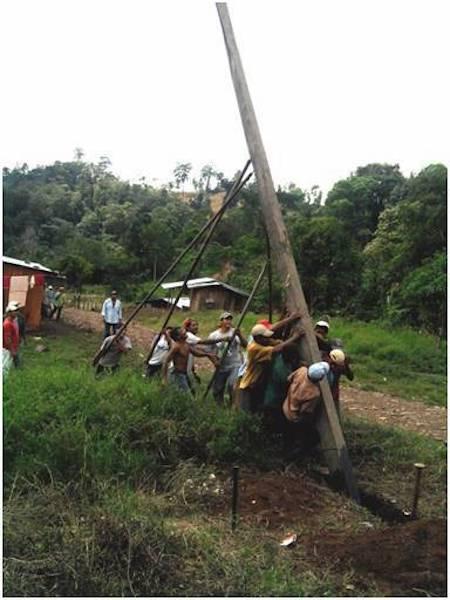 Lifting of the electricity grid posts.

The association has had great success in mobilizing residents within the region, including women, to participate in and take ownership of projects. Alongside a number of community scale micro-hydro projects that have provided electricity in the region for the first time, the El Bote Small Hydro project located between El Cuá and San José de Bocay supplies enough power to meet present demand in the region with significant surplus to sell or export to the national grid at the contract price of 6.8 cents per kWh. In three years, there will be an additional US $300,000 of revenue available that will be re-invested in further development projects for the region.

Before the construction of this plant, many generations of families had never had access to electricity. The plant has been the driving force behind the thriving economy of El Cua today. Moreover, drinking water systems that capitalize on pristine mountain water resources tapped into for the hydro-electricity plant has given families in the region access to clean drinking water. Thirteen separate installations have been made in towns within the region to date. Prior to this source, families predominantly relied on the contaminated Bocay river for drinking water, cooking and household needs.

“This project addressed basic needs for water and energy with a lot of local volunteer labour and some local democratic supervision based on local public ownership.”
–  Evaluator David Sogge